Find the right balance with your horse & yoga

What Are The Essential Women’s Clothes For Horse Shows?

For anyone with an interest in horse riding, riding pants and breeches should be considered wardrobe essentials. Some may claim the two terms are interchangeable. But, there are a few subtle differences that make one or the other more suitable for certain situations.

So what’s the difference between jodhpurs, riding tights & breeches? Which should you choose?

The history of jodhpurs

First of all, let’s start with a very brief history lesson on jodhpurs. These are named after the city of Jodhpur in the Indian state of Rajasthan where the royals and wealthier citizens would play polo.

While doing so, they wore a particular type of pants known as ‘churidars’. These were flared at the top and tapered at the bottom. As the British also started to play polo, they adopted these garments as their pant of choice, naming them after Jodhpur in the process. This would account for the unusual spelling of the word.

As with most things, jodhpurs have evolved over time, with the baggy fit becoming tightened, along with a few other subtle alterations.

What’s the difference between jodhpurs & breeches 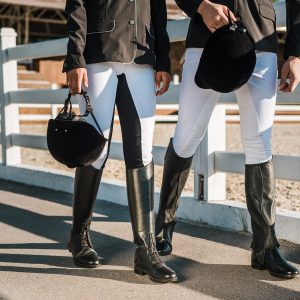 The only real physical difference between jodhpurs and breeches is how far down the leg they go.

Jodhpurs are full-length, like any other pants, and are often rolled up by a couple of inches at the bottom. However, you can buy jodhpurs that have a ‘stirrup’ that goes under the foot to stop them riding up the leg. They are usually worn with paddock or jodhpur boots.

Breeches, on the other hand, stop just above the ankle. They will likely be more tapered at the bottom, and may even have a touch and close fastening to get as snug a fit around the calf as possible.

As they finish higher up the leg and have less material at the bottom of the leg.  Breeches fit neater into long riding boots or boots with chaps, which is one of their biggest advantages.

Both breeches and jodhpurs are tight fitting and made to stretch and move with your legs. They will also often have thicker patches of padding on the inside of the legs and sometimes a fullseat patch for extra comfort and to make it easier to grip the saddle. The seams may also be offset or on the outside of the leg only, to prevent friction between you and your horse.

Should you wear jodhpurs or breeches?

Whether you should wear jodhpurs or breeches largely comes down to personal preference. Our advice would be to try both to see which you’re more comfortable with.

Jodhpurs are great for everyday riding and are often deemed a little more casual than breeches. You wouldn’t tend to wear them with long riding boots, however, as the material between the boot and your leg can get a little uncomfortable.

Some riders deem breeches to be more formal than jods, and prefer to wear them when competing, but jodhpurs can be just as smart. Breeches do tend to be a little more on the expensive side, but most will agree they are more comfortable, thus warranting a few extra dollars.

Jodhpurs are often thought of as children’s horse riding gear.

Let’s throw another one into the mix – riding tights. As you’d expect, tights are commonly worn by female riders, and are designed to be even more stretchy and flexible than breeches and jodhpurs. They’re great for warmer weather, although you can get fleece-lined riding tights for the colder months too.

Some would consider riding tights to be informal, primarily for more leisurely riding activities.  However, they’re becoming a more popular and versatile item now, and some brands are starting to produce them in competition colors. Many riders love the extra comfort of riding tights, partly due to the lack of fastening around the top.

What are the best riding tights and breeches? 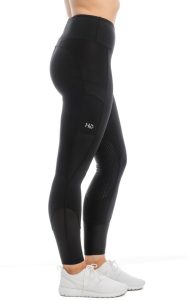 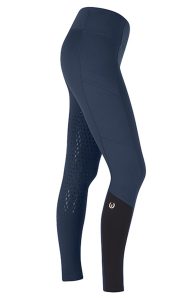 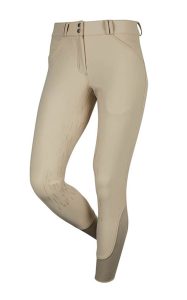 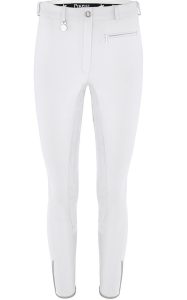 Do you prefer to wear breeches, jodhpurs or riding tights? Let us know in the comments or say hi on Instagram & Facebook.

How to Become a Better Horse Rider

How Much Weight Can Your Horse Carry? Horse Rider Weight Calculator

This website uses cookies to improve your experience while you navigate through the website. Out of these cookies, the cookies that are categorized as necessary are stored on your browser as they are essential for the working of basic functionalities of the website. We also use third-party cookies that help us analyze and understand how you use this website. These cookies will be stored in your browser only with your consent. You also have the option to opt-out of these cookies. But opting out of some of these cookies may have an effect on your browsing experience.
Necessary Always Enabled
Necessary cookies are absolutely essential for the website to function properly. This category only includes cookies that ensures basic functionalities and security features of the website. These cookies do not store any personal information.
Non-necessary
Any cookies that may not be particularly necessary for the website to function and is used specifically to collect user personal data via analytics, ads, other embedded contents are termed as non-necessary cookies. It is mandatory to procure user consent prior to running these cookies on your website.
SAVE & ACCEPT